As a Brit, it is my right, nay, it is my duty – my patriotic duty – to moan about the weather. Up and down the country for the last three-ish weeks there will have been cries of ‘It’s so hot, it’s too hot, it’s too too freakin’ hot, I wish it would rain, oh if only there was more of a breeze’ etc etc etc. Prior to this, of course, the chat was reversed as we rolled our eyes skywards then rolled them 360 degrees at the grey clouds as we layered up and wondered when that sun was ever going to put his hat on.

There can be no denying this sunshine is glorious. But when you are in charge of a five month-old baby, albeit a wonderfully good-natured and easygoing baby, thirty degree heat becomes something to battle rather than bask in. And then if you have to factor in a really  unpleasant sickness bug striking not just you, but your husband, on your birthday weekend, on the hottest weekend of the year so far, well it’s safe to say there have been more than a few choice swear words aboot this hoose.

So far and luckily Zee has only been ill a couple of times and we were both on hand to care for him and take him to the doctors and treat him and nurse him back to health. Now, he may be a pretty smart baby (he can roll on to his tummy and everything, except he gets stuck, and then cries, and then, ok well, maybe he’s not *so* advanced yet), but it’s something of a tall order to expect him to fetch us water and mop our brows when we are both ill. In fact, the prospect of being ill, on birthday surprise day of all days, was so utterly infuriating we went into denial mode. The conversation early Saturday morning went a little like this:

‘But I’ve got birthday surprises all day!!’

Eats bagel. Throws up. Gets back into bed and looks sad.

‘Are you sure you’re not the one with the temperature?’

‘Sarah’s already been up it, let’s ask Audrey and Nev? Except I bet they’re busy too!’

‘The tickets are non transferable and yes, they are all busy today. They all have plans. Plans to meet us. For lunch. Surprise!’ 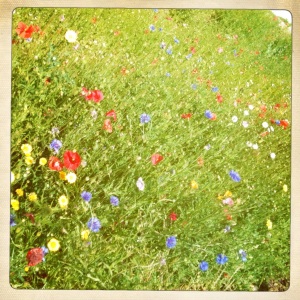 Plans were cancelled and as the illness took hold, so we took it in turns to hold Zee and feebly attempt to play with him and keep him entertained before exclaiming ‘Quick take the baby, I’m going to be sick!’ Ahhh, true romance. I hadn’t really contemplated what I’d do if I got ill with a baby, let alone both of us. It turns out you just get on with it, because there is nothing else to do. Zee beamed and cooed his way through it all, seemingly delighted to have both mummy and daddy all to himself for a few days, despite us being sickly and on zero form. So there it was, rubbish timing in baking heat but it’s done. The sunshine, however, continues, so tomorrow I shall pack up my troubles in the nappy bag and take Zee venturing out to the lido, where wildflowers grow outside and I can splash him around to our hearts content inside. It’s good to be home.